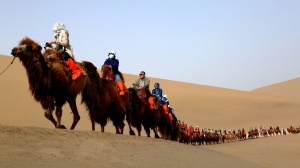 China's ‘One Belt, One Road’ global investment plan mapped out

From 3 to 5 November 2018, Vice-President of the Tatarstan Academy of Sciences Vadim Khomenko participated in the International Scientific Forum on the Belt and Road Initiative, which was held in Beijing (China) under the auspices of the Alliance of International Organizations (ANSO) in the Belt and Road Region. This scientific event was designed to ensure a large-scale exchange of information between scientific organizations in different countries in terms of the structure and quality of scientific research that they are currently carrying out and in the near future.

Vadim Khomenko made a report on the history, current state and prospects of scientific research and the organization of science in the Republic of Tatarstan. He had a personal conversation with the President of the China Academy of Sciences, where outlined the readiness of the Tatarstan Academy of Sciences to sign an agreement on cooperation between the two Academies at the time of the next meeting at the level of the first heads of organizations.

This year marks the fifth anniversary of the Belt and Road initiative, proposed by Chinese authorities in the autumn of 2013. The ambitious project is aimed at creating infrastructure networks linking Europe, Asia and Africa.

So far, the challenging project has attracted around 100 countries across three continents. The new infrastructure project links Asia, Europe, and Africa through a network of railroads and shipping lanes, and is set to reach South America.

The Silk Road was a land route across Europe and Asia used by ancient and medieval merchants to carry silk and other commodities by camel or horse to and from China, Persia and the Roman Empire.

China has invested heavily into the project with reported $900 billion having been spent on projects in partner countries. As part of the broader initiative, a 336 kilometers (209 miles) rail line was constructed to link Budapest and Belgrade, a gas pipeline was built in Pakistan, and a high-speed rail link was launched in Thailand.

Most of the investment projects of the Belt and Road initiative have reportedly benefitted China’s state-owned corporations. Statista's Agne Blazyte has visualized distribution of Chinese heavy investments connected to the project across the world. As the map shows, Southeast Asia remains a high priority for China, while India, Pakistan, Bangladesh and Myanmar are among other important beneficiaries.